The “business of lending to the masses is under constant attack!” Witness the recent passage of the <36% APR HB539 bill enacted in California, the devastation of lending to the under-banked “thin-file” residents of South Dakota, the latest machinations occurring in Nebraska…
We simply do not have the clout, money, political connections and collaboration that our opponents have at their disposal. [Think banks able to access capital at ridiculously low costs from the FED (taxpayers], credit unions; they are non-profits and pay no taxes, the various so-called consumer protection advocates who in many cases are simply shills having agendas that fail to acknowledge the plight of the 50% of all US households who cannot access $400 cash when suddenly facing an emergency financial challenge.
Sure! Our industry has some bad apples! Every endeavor does, be it for profit, charitable, non-profit…
Do you realize the executives at the Red Cross [$500,000/yr} or the infamous CRL do not work for free? They want to keep those soft jobs!
We are not saints! But we certainly are community leaders in many cases who deploy our profits to provide service to our customers, our community, our churches, our employees and their families, our investors… hell, even our landlords and banks! [Take a look at Amscot Financial as just one of MANY examples.]
The business of lending to the masses is undergoing tremendous upheaval. The internet, smartphones, artificial intelligence, data scraping, automation, the millennial generation is replacing the “Boomers,” websites, chat boxes, identity fraud, LMS cloud-based platforms, same-day ACH, big brother Google and Facebook, the “bank model” and its access to cheap money, the <36% APR theme…
ALL these issues and MANY more are creating disruption AND more importantly, OPPORTUNITY for those of us who embrace change, stay informed, reverse engineer the newest business models available to legally and profitably serve the hundreds of millions of hardworking folks who need a financial leg up now and then.
A collaboration with a Native American Indian tribe is BUT one of many solutions to your path remaining in business while helping your customers deal with life.
PS: Reach out to me, Jer TrihouseConsulting@gmail.com if you would like to explore potential solutions to your specific challenges in your B2C business. My Team and I travel the world, meet with executives and founders of a multitude of companies offering tribe introductions, capital raises, methodologies & products that adhere to the <36% APR issue while still achieving 200%+ APR’s, executive search, new product & platform launches, California HB539 solutions… I’m always available to explore… and if I can’t help, guaranteed I know a savant with the expertise to help you! 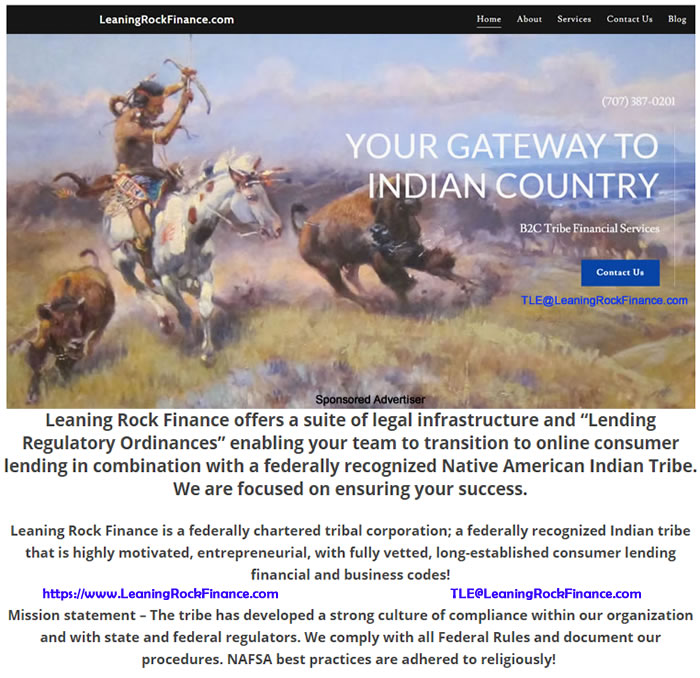 Click the Image Above to Explore a Collaboration with a Federally Recognized Native American Tribe in the B2C lending Space!

This “Opinion Piece” below appeared in Forbes and was written by Mary Jackson the CEO of the Online Lenders Alliance, the online lending industry’s center for lending, technology, and innovation.
Read and “digest” wholeheartedly Mary Jackson’s insight!

Many tribes are also located on geographically isolated reservations that are far from urban population centers. For these tribes, on-reservation business activity is difficult to build and harder still to sustain. With traditional forms of commerce largely unavailable, the internet and e-commerce have emerged as lifelines to them, and Tribal Lending Enterprises (TLEs), specifically, have been a major asset in helping generate revenues to fund their governments and provide for their members.

Lending revenues increase funds for the tribes’ operating budgets, helping them to provide essential services like health care, elder care, infrastructure, and education. In addition, these businesses create jobs in areas where unemployment has long been rampant, providing a meaningful opportunity to tribal members in their own communities. In short, they allow tribes to be more independent and self-reliant, and tribes have created their own enforcement practices and regulatory bodies to ensure they are in the driver’s seat.

Like virtually any other business sector, the online lending industry has a variety of participants who bring it to life and ensure it operates smoothly. The membership of my online lending association comprises a diverse cross-section of the industry, including big, publicly traded companies; small, privately owned businesses and companies owned and operated by sovereign Native American tribes — among others. In addition to actual lenders, members rely on third parties such as service providers, marketing agencies, web designers, application developers and data bureaus.

For Native American tribes who have developed TLEs, service providers and vendors play a vital role. Just like lenders of all types, tribes partner with other fintech companies to offer credit in innovative and convenient ways — thereby making loans available to consumers who otherwise would have little or no access to lending options.

These third parties enable creditors to reach different customer segments by leveraging an existing customer base or customer lists, underwrite borrowers more effectively by using nontraditional data sources that go beyond the FICO score and make additional loans by providing liquidity and funding. They help with advertising and marketing the business as well as with screening customers pursuant to fraud prevention and know-your-customer guidelines.

The U.S. Treasury’s fintech report and the Office of the Comptroller of the Currency (OCC) have acknowledged this vital business function for banks and other lending businesses. According to the OCC Comptroller’s Handbook on Installment Lending, the most common reasons for banks to use the services of an outside vendor include cost savings, capacity reasons and access to expertise and resources. This is also true for tribal lenders.

As to regulations, tribal lending is subject to the same 19 federal laws that banks and all other financial service providers must adhere to in their product offerings. Laws such as the Truth in Lending Act, Equal Credit Opportunity Act and the Electronic Fund Transfer Act are just a few of the notables. In addition, sovereign tribal nations set their own financial services laws and regulations. Just like states, tribes have formed their own regulatory authorities, which enforce tribal and federal regulations for lending and consumer protections.

For years, tribes have fought for their right to self-determination, which includes the power to enact their own laws and be governed by them. As they have entered the e-commerce frontier, many tribes have set up sophisticated online lending businesses that can compete with the biggest players in the industry.

This is a relationship that should be encouraged — and not disparaged, as some industry opponents have done in recent years. The service providers who partner with tribes are a key part of driving them forward and helping to establish robust, well-run and viable businesses. And as a result of these partnerships, many tribes are thriving as they’re seeing previously unforeseen revenues fill tribal coffers.

These tribes are true entrepreneurs and are a model for the entrepreneurial spirit. New entrants to the online lending space like these are welcomed, and they are a sign of the diversity in fintech that we should all be embracing. The service providers who they partner with play a key role in bringing forth well-established and compliant lending practices to all lending entities — big and small, old and new.