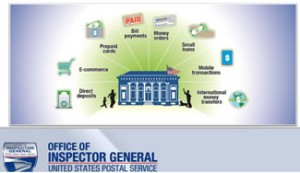 The agency’s Office of Inspector General released a white paper Monday that said the cash-strapped Postal Service could earn nearly $9 billion annually by offering financial services to roughly 68 million consumers who are not served by traditional banks.

Although the white paper explicitly said the Post Office should work with local financial institutions — not compete with them — bankers and payday lenders reacted negatively to the proposal, saying it would pose significant risks to the system.

The USPS is financially motivated to offer more financial services, saying in the white paper that if it captured just 10% of the current unbanked and underbanked market, it could result in $8.9 billion in new revenue each year. The report also suggested offering payday loans that charge a $25 application fee and 25% APR.

Perhaps The U.S. Postal Service will need an ACH provider.

To have these timely Posts delivered to your inbox, sign up below. Spam is for jerks! We are not jerks!!