As YOU know, this is an incestuous industry. Billions $$ are at stake! We’re in the midst of a hurricane! Operators are bailing, consumers can’t get a loan – they’re calling out-of-state stores and literally begging for cash. Loan portfolios are being abandoned or sold at fire sale prices, call centers are shutting down right and left…

I’ve been on the phone 6 AM to past midnight with EVERYONE for the past 14+ days non-stop; Saturday’s & Sundays’ included. You know me! Until this firestorm hit, I woke-up whenever I felt like it :o) Half the time, I was kayaking on the back-bay when I pontificated on our industry.

As you digest this, remember, “Disruption rarely comes from within.”

New York Banking Commissioner Lawsky launched a series of punches to banks and online payday loan lenders demanding they stop making loans to residents of New York. Additionally, he said all outstanding loan principals and fees with NY borrowers are “void and uncollectable.”

Then the NY AG piled on with more…..

ACH providers, NACHA and banks were attacked for enabling payday loan lenders to “skirt NY usury laws.” The Native American Financial Services Association walked the halls of Congress demanding the State of NY back-off on all this “ACH noise” and “end their attack on tribal sovereignty.” ACH providers reacted in knee-jerk fashion and began shutting-off lender access to the ACH system – virtually overnight without warning! Even state licensed payday loan lenders were cut-off!

Payday loan lenders having “bricks-n-sticks” were jubilant! Suddenly their online competitors – the offshore, the tribes, the choice of law lenders were out of business! Phone calls to stores by consumers “looking” for a loan increased 1000% overnight. Little payday loan stores in places like Lake Forest, California (Danny Verette – Paid2Day.com) were receiving 20, 30 40+ calls per day from consumers all over the country!

During this “firestorm” of attacks and, what APPEARED TO BE eminent destruction of the payday loan industry, a company called Paytoo arrived! What IS Paytoo you ask? Simple! A “virtual wallet.” Literally, a consumer’s financial purse or wallet “in the cloud.” Cash-in, cash-out and money management all from a mobile phone, a tablet, a computer, an ATM machine… The Paytoo virtual wallet platform enables a consumer to access ALL their financial data, bill pay, payroll loan request, transfer funds to friends, family, merchants, load a Discover or MasterCard, get cash at an ATM machine, create a virtual check, deposit payroll proceeds, manage their finances… a Paytoo virtual wallet is literally a depository for a consumer’s dollars made available anytime, anywhere, 24/7 “LIVE.”

What’s this mean for consumers? NO need for the 30,000,000+ so-called “unbanked” to physically visit their local check casher and pay 3% – 9% of their net payroll proceeds to cash their check. Paytoo does this FREE! No one gives a crap about having a bank account. YOU NO LONGER NEED ONE! ASTOUNDING! Via Paytoo, a consumer can deliver money to merchants, family members (in Mexico City, San Diego, or Paris :o) FREE! Cash savings with each “spend.” “Virtual” pay by check is featured. A consumer having a bank account, can choose to “tie” it to their “Wallet.” Paytoo’s platform subscribes to the philosophy of 1 wallet/1 consumer/1 lender. Paytoo brings “real-time” 24/7 comprehensive money management tools to the masses.

What’s this mean for lenders and the AFS industry? No more “check is in the mail.” No more waiting for an ACH to be batched, submitted and wait 2-4 days for transactions to clear. No more 3-5 days of “reserves” to be held by your ACH provider. The lender is at the “front-of-the-line” to be paid by the consumer. The Paytoo platform lowers your “scrubbing” and due-diligence costs on the front-end. Check cashers are DEAD! MoneyGram ?? Western Union?? The stored value cards we’ve all been trying to peddle with ridiculous consumer fees; DEAD! Implement the Paytoo API and launch today.

What’s this mean for Regulators? 1 consumer = 1 payday loan. (Hm.. appears to be a state data base “killer.” States may not be happy to lose the revenue many of them currently receive from Veritec. Think Florida for example.) KYC (Know Your Customer) issues? Solved. Paytoo Corp, a wholly owned subsidiary of Paymotech Finance Corp., is a registered Money Service Business (“MSB”) with The U.S. Department of Treasury.

So, what’s been the reaction by the payday loan industry to the intro of the Paytoo platform? “Every lender wants to keep this for themselves.” Not possible. Could not keep the “lid” on this thing. All hell broke loose! It’s like a shark frenzy :o)

And, how is it that Paytoo just “happened to appear” on the scene at this moment in time? Just as this “ACH TSUNAMI” nearly annihilated a $50B industry?

Paytoo CEO Michael Poignant has been quietly laying the groundwork for the Paytoo virtual wallet “killer application” since 2005. Michel P. has been beating on our vertical for years! He was used, abused, disrespected, left waiting in lobbies…until “The Perfect Storm!”

You might ask at this juncture, why Jer finds himself in the enviable position of playing a role in helping Michael Poignant, Brett Hudson and the rest of the Paytoo Team re-introduce the Paytoo platform to the AFS industry? All I can say is, “Thank god I promptly responded respectfully (and with humor) to the communications Michel P. shot out to me over the past many, many months!

Those of us in the AFS industry who survive, and come out on the other side, bent but not broken, will be rare. The “Virtual Wallet” is the future. ACH will remain but there are better, cheaper options. Europe, S. America, Mexico… even Africa is ahead of the States with adoption of digital, virtual currency, bill pay, money transfer…

Is Paytoo the “killer app” for our space and more? Will Paytoo become the “default” $$ delivery platform for the AFS industry as Google is for search? How far along are Paytoo’s competitors? Can Paytoo scale fast enough to meet demand? Can DLLR, CSH, EZPW… or any other behemoth build/employ/scale as robust a platform as Paytoo has already deployed in Europe and S. America and now the USA? Paytoo is inundated with Demo Requests and “sandbox” setups for testing. Lenders with $100M + are testing now; they’ve only dipped their toe in the waters so far… afraid they could be eaten by a SHARK. Afraid of what happens to their data, their customer… Can Paytoo sell-out? Get eaten?

Paytoo has 4.5M world-wide consumers currently using the Paytoo virtual wallet! Only 300,000 are U.S. based. These numbers are increasing daily. Who wants to partner with Paytoo? Who wants to do business with Paytoo in the USA NOW?

“Apple will sell a few to its fans but the iPhone won’t make a long-term mark on the [financial services] industry.” Bloomberg, January 14, 2007. (THX to Bank 3.0 by Brett King. Attention: READ THIS BOOK or die! Better! Buy Brett’s book and bring it to FISCA for his autograph :o)

No single Lender has a large enough market share to slow adoption/integration with the “virtual wallet.” A complete and irreversible DISRUPTION is upon us. Fail to embrace the “Wallet” and your business will perish. We are in the midst of a MAJOR SHIFT in financial services. The $$ distribution system HAS changed.

Today’s consumer has grown-up with Facebook, Twitter, iPhones… Lenders who fail to figure out this new paradigm will soon be irrelevant. As a lender, your costs will come down, your market share will increase, Big Data loan decisioning algorithms will improve your ROI, human loan officers will soon be archaic, consumer rates and fees will fall…

OK, ENOUGH NAME! Signing out from Paris. I’m hiding out from all the flack…  :o) Use this in its entirety!

You’re kidding me? You’re a lender and YOU STILL have not seen the “Paytoo Wallet demo?”
GO HERE: http://trihouse.wufoo.com/forms/request-for-demo-of-wallet-via-trihouse-consulting/

WHAT? You’ve demo’ed the Paytoo Wallet and you’re still on the side lines? Then get out of the way. You are about to be crushed. 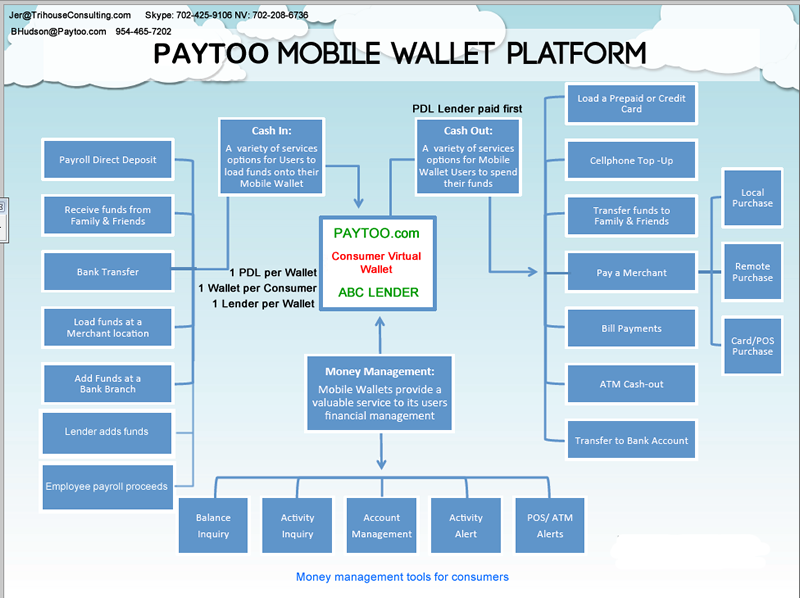