Tag: how to start a car title loan business

Of course, PEW takes pot shots at the industry and embraces a cynical evaluation of the car title loan product. However, don’t dismiss the numbers behind their madness. (Be sure to review the bottom of this Post where I’ll reveal the number of participants PEW enlisted for this “Study” on a $3 Billion dollar industry and a link to the actual “Report.”:-) And, start here to learn more about starting a car title loan business.

Here’s a link to the original PEW “Report.” LINK 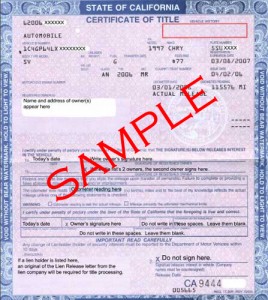 By: AutomobilePawn.com [Learning/Training Center]. Our world of custom built, small dollar loans is evolving rapidly!
The incumbents have been knocked back on their heels. P2P, Kickstarter models, Lending Club, the DOJ, the CFPB, mobile banking, bank discontinuance… have DISRUPTED our playing field.

By systematically severing and dissecting custom built, “bespoke” consumer loans into small, discrete units of satisfaction, a disruptive Team can upset the current playing board and construct a new consumer game that attracts beguiles, and seduces not only borrowers, but capital.

You’ve invested hundreds of hours searching Google for every bit of information you can find on the car title loan industry.

Your first step to answer most of these questions? GO GET ONE! That’s right, visit your potential competitor – the biggest and the baddest – and get a car title loan; get a collateralized loan.

Go through the loan process. Get copies of EVERYTHING. Ask the clerk open ended questions.

What? You’re telling me you don’t have the title to a vehicle so you can’t do this “mystery shopping?” Then take your mom, your sister, your best friend… take someone with a title to their vehicle and MAKE THIS HAPPEN! Borrow your Dad’s watch or go beg grandma to smooth this bump to achieve your dreams. Beg if you must!

If you can’t pull-off this simple exercise, STOP NOW AND GET YOURSELF A JOB. You don’t have what it takes to make serious money in the car title loan industry much less providing collateralized loans to borrowers by the tens of thousands!

Email: Jer@PaydayLoanIndustryBlog.com
PUT CAR TITLE or COLLATERALIZED in the subject in YOUR EMAIL!

It’s time for action. Focus on the one or two things you need to do today. Daily achievement will result in all the other dogs tied to your sled having their noses up your ass rather than vice versa. Complements? Complaints? Ideas? jer@trihouseconsulting.com

how to start a car title loan business
20
Mar

(For substantially more detail, refer to our “Car Title Biz Manual.” We run Boot Camps in a “live” store in Lake Forest, Calif.)

These are AVERAGES based on 274,000 “single payment” car title loans and refinances. (No installment lending)

* Assumes owner/operator provides labor
* Your task? How much you charge borrowers in your state/province!
* Startup costs vary. Usually between $5,000 & $15,000 (Rent, signage, deposits, licensing…)
* Your results maybe better or worse. Who knows?

To have these timely Posts delivered to your inbox, sign up below. Spam is for jerks! We are not jerks!!

How to Start a Car Title Loan Business – NOT

NEW YORK – Attorney General Eric T. Schneiderman today announced a settlement with an out-of-state company that offered short-term loans, secured by borrowers’ vehicles, at usurious rates of interest. Under the terms of the settlement, the company agreed to cease doing any loan business in New York in violation of the New York law.

Manor Resources LLC (Manor), a Delaware corporation with its principal place of business in Chicago, IL, operates a website through which it conducts its nationwide loan business. All applications for its auto title loans are made through the website. The stated interest rate is 10 percent per month, or 120 percent Annual Percentage Rate (APR). Manor takes a security interest in the borrowers’ automobiles which, in the event of default, may lead to repossession of the motor vehicles.

“Lenders that bypass our state’s usury laws to prey upon struggling New Yorkers will continue to be held accountable and penalized for their actions,” Attorney General Schneiderman said. “New York is not open for business to predatory online lenders, and Manor is just the latest company to learn that lesson. My office will continue to monitor the web for businesses like Manor so that we can put an end to these illegal practices and protect New Yorkers in financial distress.”

New York Banking Law §340 makes it unlawful to engage in the business of making loans in the principal amount of $25,000 or less to an individual for personal, family, household, or investment purposes and charge greater than 25 percent interest without first obtaining a license from the State Superintendent of the Department of Financial Services. Without such a license, the maximum interest rate a lender is permitted to charge by law (General Obligations Law §5-501 and Banking Law §14-a) is 16 percent APR. New York Penal Law § 190.40 makes it a crime to charge interest at a rate exceeding 25 percent APR.

Manor’s loan contracts required that all disputes between the parties had to be resolved through arbitration in Illinois rather than through the courts. The settlement provides that loan agreements hereafter used in New York shall not have any mandatory arbitration clauses.

The agreement also provides for all loan accounts on which a balance is currently owed, whether such accounts are current, delinquent, in default, or charged off, to be closed with a zero balance. In addition, the agreement requires the company to notify any consumer reporting agency to which it gave consumer information to delete all references to the transactions from customers’ credit records. The company will pay the Attorney General’s Office $23,120, representing all interest and fees (but not principal) that it collected from New York residents, and the Attorney General’s Office will distribute refunds to eligible consumers. In addition, the company has agreed to pay the Attorney General $10,150 in costs and penalties.

how to start a car title loan business
11
Dec 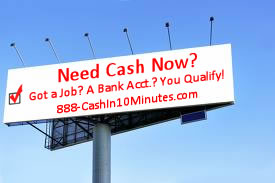 Specifics? We have a location near a freeway off-ramp. We put up a highway billboard with a large graphic of one of our founders, a pot-of-gold and a simple call to action. After implementing the new billboard one week, we increased our weekly scrap gold purchases 30% and increased our store net revenue (on the gold side) from $4000/week to $5200/week. Scrap gold buys and revenues continue to increase! Our “out-of-pocket” costs are less than $300/month.

The point? Don’t forget the basics! Simple works!! Jer@PaydayLoanIndustryBlog.com
Leave a comment! What do you think? What’s working/not working for you?