Tag: Hi! It’s Bobby From the US Post Office & You Owe Us Money

Hi! It’s Bobby From the US Post Office & You Owe Us Money 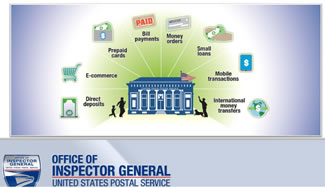 “Hi, my name is Bobby and you’re going to prison if you don’t pay my client, the United States Post Office, their MONEY! Plus, we’ll cut-off your ability to buy stamps! And, we’ll sick the IRS on you. And…”

So Elizabeth Warren thinks it’s a great idea for the US Postal Service to loan money to the “underbanked.”

And this little ditty from The New Republic:

“One of the key messages of Obama’s State of the Union address is his willingness to bypass Congress to create jobs and reduce inequality. As luck would have it (Give Me a Break!) , a new government report detailed an innovation that would preserve one of the largest job creators in the country, save billions of dollars specifically for the poor, and develop the very ladders of opportunity that Obama has championed as of late. What’s more, this could apparently be accomplished without Congressional action, but merely through existing executive prerogatives.”

“What’s the policy? Letting the U.S. Postal Service (USPS) offer basic banking services to customers, like savings accounts, debit cards and even simple loans. The idea has been kicked around policy circles for years, but now it has a crucial new adherent: the USPS Inspector General, who endorsed the initiative in a comprehensive white paper.”

Wow! Doesn’t this motivate you to apply for a job in the new U.S.Postal Service’s Department of Lending?

I can’t imagine taxpayers funding these loans! Worse, the United States Postal Service is going to “partner” with banks; the ultimate “loan sharks.” These are the same banks who were charging their own customers $10 in fees per $100 loaned IF their customer had direct deposit? NO RISK LOANS!!

Add to this equation the call center collection personnel working out of India, Panama, Belize…! “Hi, my name is Bobby and you’re going to prison if you don’t pay my client, the United States Post Office, their MONEY! Plus, we’ll cut-off your ability to buy stamps!” And, we’ll sick the IRS on you. And…”

In order to pull this off, our federal government would have to provide clarity and federal direction regarding the 50 states. Why not do this now and allow entrepreneurs to figure out how to construct an appealing product and compete with one another? Why should taxpayers, the FED’s, the U.S. Post Office and banks collaborate and compete against private business?

Next, our federal government, in conjunction with consumer literacy groups, will decide the American reading level is not what it should be and launch a new enterprise to compete against Amazon. After all, the the Obama administration could subsidize iTunes, eBooks and movies easily with taxpayer dollars.

Be sure to check out Michael Brown’s thoughts on this matter over at CreditAccessBusiness.com. And if you’re interested in Texas payday, car title, installment you must make his acquaintance!

Hi! It's Bobby From the US Post Office & You Owe Us Money