The question put to our customers? How accurately could they estimate how long it would take the borrower to pay us back and how well the borrower understood our loan product.

No hand cuffs were put on the professor.

Payment to him did not hinge on his findings.

The results of this study per Professor Mann?

Mann said, “That while many borrowers are desperate for cash, they understand the cost of the loans, which typically charge an upfront fee of roughly $15 for every $100 borrowed.”
“The problem isn’t that payday loans are expensive, it’s that we live in a capitalistic society and don’t have a safety net, and lots of people make less than other people and can’t make ends meet,” he said.

Why all the hullabaloo?

Depending on the agenda of the reviewer of his findings, Professor Mann’s 2012 study strongly suggests that underwriting standards are often not necessary. Then again, in other circumstances thay maybe. “The relevant policy question is whether borrowers, deciding to start borrowing from a payday lender, understand what will happen to them,” said Mann in an interview.

Ironically, the recently appointed CFPB Director K. Kraninger and her Team are using this same study produced by Professor Mann to refute the attempt by Richard Cordray – previous administartions head of the CFPB – to constrict loan offerings to sub-prime, cash strapped consumers

Interestingly, Professor Mann argued how the CFPB, under former Obama-appointed Director Richard Cordray, interpreted his research, suggesting that “the current rule overemphasized cases where consumers borrowed beyond their means.”

The study revealed that 60% of first-time payday loan borrowers accurately predicted within two weeks when they could repay a small-dollar loan. But it also indicated that in many cases the flip side was true — that 40% of borrowers had no idea when they were going to pay back a loan.

Today, the new CFPB is using this study to undermine Richard Cordray’s craziness. The study seems to strongly suggest that consumers can reliably predict when they can pay back the small dollar loan lender and thus no “ability to repay” determination is required!

In court documents, the CFPB under former acting Director Mick Mulvaney cited Mann’s study as a key piece of evidence in support of “revisiting” the underwriting requirements in the payday rule.

Citing Mann’s study, today’s CFPB advocates that our payday loan industry trade groups HAVE presented “a substantial case” demonstrating that most payday loan borrowers DO KNOW “what they’re getting into when they take out a payday loan.”

A judge recently agreed to delay the compliance deadline for when much of the Cordray rule will take effect to give the bureau time to propose and finalize a revamp.

“Basically the only thing that has changed the Bureau’s analysis is the people doing the analyzing.”

So, what’s the premise of our new CFPB to throw out the “ability to repay” analysis requirement? “If borrowers understand the product, then it cannot be abusive. Elements of abusive include “a lack of understanding on the part of the consumer of the material risks, costs, or conditions” of the loans as well as “the inability of the consumer to protect the interests of the consumer in selecting or using” the loans.

Again, according to who interprets Professor Mann’s study, it can be concluded that our consumer understands our payday loan product and “what can happen to them if they do not repay their loan.”

So… our products and processes are not unfair or abusive.

From Professor Mann: “The premise of the rule was that so few people understand that they are going to roll the loans over a lot that the product is unfair and abusive. That’s the real difficulty. It’s difficult to regulate out of existence a consumer finance product because some percentage of people don’t understand how the product works.”

“The funding came from an industry trade association, which hoped that the study would produce favorable findings, but the arrangement, as always, was that I could publish whatever I wanted whether the results struck them as good or bad,” Mann said. “There was not really any relationship with the payday lender.”

This “ability to repay” analysis WAS a big, black, ugly cloud hanging over our industry!

Sure, maybe some lawyers, lobbyists and more than a few vendors serving “The BUSINESS of LENDING MONEY to the MASSES” would bill for more hours.

Our customers would have zero ability to get a few hundred dollars in their hand to pay an emergency bill, get their prescription filled, keep the lights on and avoid reconnection fees, pay their traffic ticket, fix their car to keep their job…

SMB’s all over America would shut down, jobs lost, landlords vacancy rates climb…

Banks & credit unions want NSF fees! They do not want to go through the hassle of lending $300 to “the masses.”

What do YOU think? Email: Jer@PaydayLoanIndustryBlog.com 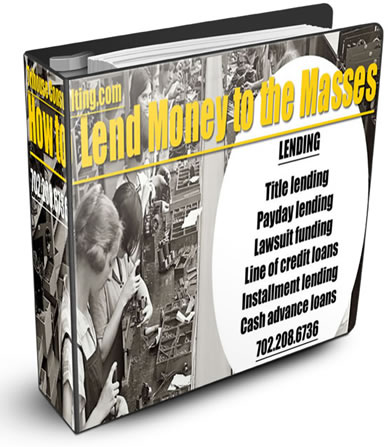 How to Lend Money to the Masses

How to Launch a Payday Loan Business

Prefer to call them installment loans or line-of-credit loans?

You’re a money lender! But are you a Loan Shark?

Or, you’re thinking about the business of lending.

Here’s a real world example of a title loan we made. All data is real except the customer’s name.

Jose had no friends or family to loan him the money. [Actually, I think he was too embarrassed to ask…]

We funded his loan and let him continue to drive his car.

Jose COULD have added a little every month to pay down the loan principal. He has not.

Are we loan sharks?

Are we financial counselors?

Do we get money to loan from the FED’s at <3% like the banks?

Should we simply tell him enough! Thank you. Here is your title?

What about the other 21.7% of our customers we have to chase?

Should we continue to earn a good profit and give a portion to our local charity?

Do you think we should put Jose on a payment plan?

Our competition charges as much as 30%/month on the loan principal.

Do we just keep Jose on the hook? We all know eventually Jose’s Toyota will break down and then what?

As several of my readers pointed out:

WHAT WOULD YOU DO?   PLEASE TELL ME: Jer@PaydayLoanIndustryBlog.com

have bank accounts. Our customers have the ability to pay back their loan! Our customer is the Walmart customer; the blue-collar, white-collar employee making $18,000 to $64,000 a year!

And MOST IMPORTANTLY what we all need to understand is that this segment is GROWING!

There is a world-wide shift occurring in the advanced economies!

The total number of employees in the service sector and other lower paying jobs is expanding.

Higher skilled, higher paying jobs are going off-shore to developing countries where wages are lower. This shift is so pronounced there is even a name for this market segment; it’s ALICE (Asset Limited Income Constrained Employed).

These are our people! Embrace them!!

Are you a Lender? Are you operating in Mississippi?

Yes? Then you MUST join the Financial Service Centers of Mississippi association!

Support your local association! This is a NO BRAINER!

The Team over at the Mississippi Assoc. have launched a new website AND have new events on the calandar.

From their new website, “The association is dedicated to offering information and tools to its members, so members are able to serve their customers in a fair, ethical, and helpful way. If you need information on Mississippi’s short-term lending industry, this is a good place to start. We keep our members well informed about upcoming legislative actions and other news events. We offer members the opportunity to meet and share ideas, find ways to be better at what we do and stay on top of issues that concern industry.”

They go on to write, “In today’s uneasy regulatory climate, it is important for business owners in this industry to stay informed. FSCM offers the opportunity to network together so members can not only be informed about important issues, but to be recognized as a large —and needed— financial industry in this state. This association holds an annual conference and a yearly membership meeting, which also offers the opportunity to meet your legislators and members of the Mississippi Department of Banking and Consumer Finance.”

So… head on over to Financial Service Centers of Mississippi website, check out the upcomimg events, become a member and SUPPORT  the “Business of Lending Money to the Masses” industry!